Originally written for former users of the CookieSafe extension, this add-on may be useful for anybody needing to import and export cookie permissions (not just values) on browsers that still or only support Firefox classic extensions (such as Pale Moon, Basilisk, Waterfox). The engine of this extension was derived from the original CookieSafe codebase and is fully compatible. Unlike the original however no automation (scheduled import & exports) is provided. 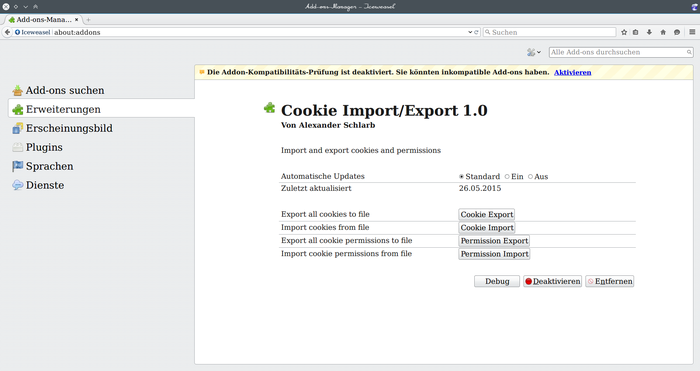 Cookie exports and imports do not use the usual Netscape cookie jar format but a custom XML format that (to my knowledge) is not supported by any other program. As there is no standard for cookie permissions a similar XML format is used for these as well.

Maximum version numbers may be off – choose the latest version compatible with your platform!

These are rebuilds since the versions orignally uploaded to Mozilla were deleted before I tried downloading them.

This extension is Open Source software.